What is Spinach Fatayer?

Spinach Fatayer pies are loved and eaten in the Middle East in countries like Palestine, Syria, Lebanon. Traditionally they are shaped as triangles and that’s how many people know what delicious stuffing these parcels hold. These pies are tangy, sour and savory with a touch of sweetness thanks to the onions and the pomegranate molasses. The star ingredient that ties all the flavors together is the tangy Sumac.

Spinach Fatayer recipe variations are many. Some prefer to make them with a thinner dough and a heavier stuffing. This particular recipe uses the same dough we used for the Zaatar Fatayer. It’s a versatile dough that can be rolled out as thin as you like or made fluffy if you prefer. It’s flavorful but still neutral to let the spinach stuffing shine through. It forms a nice crust on the outside and fluffy texture on the inside.

The stuffing ingredients are very healthy and make for a wholesome packed lunch for you or your child. Spinach, onions, pine nuts, olive oil, and the anti-inflammatory Sumac spices not only make this heavenly triangle delicious but also nutritious.

Tips for the perfect spinach Fatayer

The key to getting maximum flavor without adding too many calories is to choose the right spices! Luckily for you, Sea of Herbs has got the best spice mixes for you whether you are making traditional Middle Eastern dishes or International cuisine. Our spices will add a special something that brings out the flavor of your meats, grains and vegetables that will allow you to cook with confidence and consistency every time!

You can find Sumac as an in ingredient in Zaatar or as topping for Fatoush Salad. There are many ways to use it, but did you know that Sumac is considered a healthy super spice? We have records of its use as far back as the Roman times where it was used as an acidic spice before lemons were introduced to Europeans. It is said that it was prescribed for the Emperor Nero for its healing and anti-flatulent properties. Modern scientists are now studying the health benefits of this anti-inflammatory and anti-oxidant rich spice. At Sea of Herbs we take pride in crafting and sourcing the finest ingredients in our spices. What makes our Sumac special is its fresh and potent flavor unrivaled by stale grocery store varieties.

The spinach stuffing should ideally be prepared the night before. This allows the juices to marinate the spinach and the onions and get the maximum flavor. But if you’re in a pinch, half an hour will do. It’s also best to strain the liquid out of the stuffing otherwise as you can see in our video the parcels might have some leakage. They still turned out great though and the liquid caramelized the dough.

In the video we didn’t use pine nuts but adding the nuts to the stuffing really does elevate the flavor and add texture. It also makes this healthy, wholesome bake even healthier for you and your family! The Spinach Fatayer is a wonderful way to incorporate vegetables into your children’s diet too.

Another tip is to taste the stuffing as you are making it in order to the balance of flavors you prefer.

And as always, if you have tried this recipe and you like it, share your dishes with us, we’d love to hear from you! Also feel free to reach out if you have any questions about the recipe or our spices. 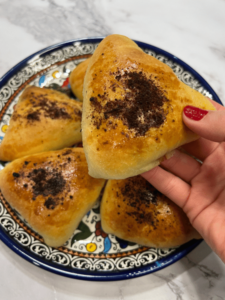 In bowl add your water, milk, sugar and yeast. Stir the ingredients and then add the yogurt, salt and oil. Add your flour gradually, to avoid drying out your dough. knead your dough until it firms up but is still slightly wet.

Transfer your dough to an oiled bowl (preferably Olive Oil) to give the dough extra moisture and flavor. Cover with cling film or a clean cloth for about an hour.

For the Spinach Stuffing:

Ideally, the Spinach stuffing should be prepared the night before to all the juices to marinate the stuffing. In a bowl add your olive oil, vinegar, pomegranate molasses, Sea Of Herbs Sumac, lemon, salt, pepper, onions and finally spinach and pine nuts. Mix the stuffing until it welts and then store in the fridge until it is ready to use. Strain the liquid before stuffing to avoid leaks in the dough.

After your dough has risen, cut off a piece of the dough and shape it into a ball and flatten it into a circle. It helps to shape the dough on a piece of parchment paper. Next, add 1-2 tablespoons of stuffing to your dough but be sure to leave the edges untouched as you need them to be dry to stick together. Bring the edges of your circle together to form a triangle and create three ridges. As I illustrated in the video, you can either bake them like that or flip them over if you are worried leakages.

Once you have shaped and stuffed all your Fatayer, brush over them lightly with your egg wash and then sprinkle with your Sumac.

Bake for about 20 to 25 minutes until our parcels are golden brown. Then, allow your bake to cool as they are best eaten a few hours after baking once they have cooled down completely. They taste even better the next day as the dough has had a change to marinate in the stuffing. Have it for breakfast, lunch, dinner or a snack. But, one thing is for sure, they won’t last long!

Close
Recent
Categories
Close My Cart
Close Wishlist
Recently Viewed Close
Close
Navigation
Categories
We use cookies to ensure that we give you the best experience on our website. If you continue to use this site we will assume that you are happy with it.Ok