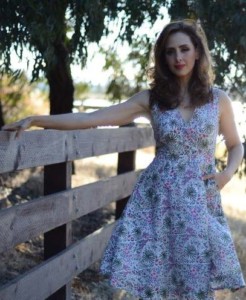 There are a few YouTube cooking channels that I watch for ideas and inspiration. It’s always exciting for me to see different people’s takes on a dish, particularly the Middle Eastern food I grew up eating. Which is why I was so delighted to find ‘Feast in the Middle East’ with host Blanche Shaheen. Blanche is not only a wonderful host, but her culinary delights—from Musakhan to her Fudgy Paleo brownies—are making me hungry as I type this blog post!

Blanche is an Arab American former television host who decided to start her own cooking channel in 2010. Her channel was a way to express her love of food and culture, and share heirloom recipes that were handed down to her from the women in her family. What’s great about Blanche’s channel is that she communicates in a universal way. She meshes her Arab and American heritage to create exciting new recipes like ‘Labneh Cheesecake’. Her approachable style has attracted a global audience, leading her to work with major networks like Virgin America, Tastemade and Curious! Blanche also has a great blog and Facebook page with lots of great articles, tips and recipes. My favorite part of Blanche’s channel and platform? She provides healthy, gluten and paleo versions of my favorite traditional dishes!

What Blanche thinks of Sea of Herbs

Check out Blanche’s review of our products in her video below:

Ways to connect with Blanche Shaheen

Expect to see more collaboration between Sea of Herbs & Feast in the Middle East in the near future.

Close
Recent
Categories
Close My Cart
Close Wishlist
Recently Viewed Close
Close
Navigation
Categories
We use cookies to ensure that we give you the best experience on our website. If you continue to use this site we will assume that you are happy with it.Ok